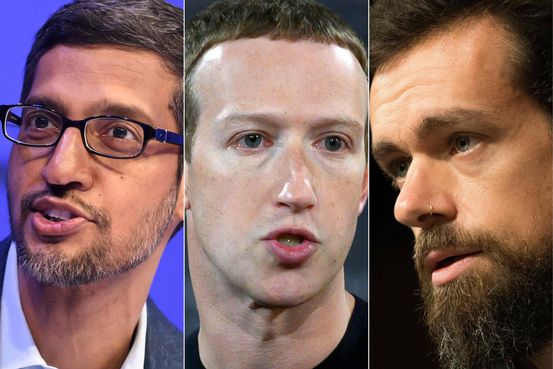 will appear before a Senate committee Oct. 28 to face questioning about their policies for moderating content on their internet platforms.

Mark Zuckerberg of Facebook, Jack Dorsey of Twitter, and Sundar Pichai of Alphabet, the owner of Google and YouTube, will appear before the Senate Commerce Committee via videoconference, the Republican-led committee said Friday.

The hearing will center on Section 230 of the Communications Decency Act, which shields social-media platforms from liability for user content—but which Republicans say has been used by tech companies to censor conservative opinions.

The companies say they make those decisions without regard to political viewpoints. Democrats, for their part, have encouraged the companies to be more proactive in policing false information on social media.

The Senate Commerce Committee’s announcement said the Oct. 28 hearing “will provide an opportunity to discuss the unintended consequences of Section 230’s liability shield and how best to preserve the internet as a forum for open discourse.”

The panel’s chairman, Sen. Roger Wicker (R., Miss.), has pushed for the hearing to occur on a short time line. He moved to authorize the issuance of subpoenas against the three CEOs earlier this month, less than a week after first asking them to appear. At a hearing to vote on the subpoenas, he noted the fast-approaching Nov. 3 election.

Democrats didn’t oppose issuing the subpoenas, although some said they didn’t believe it was necessary to question the CEOs before the election.

The Senate Commerce Committee hearing is separate from an Oct. 23 hearing planned by the Senate Judiciary Committee, which on Thursday threatened to subpoena Mr. Dorsey to appear on that date after Twitter blocked a pair of New York Post articles containing allegations against Democratic presidential nominee Joe Biden.