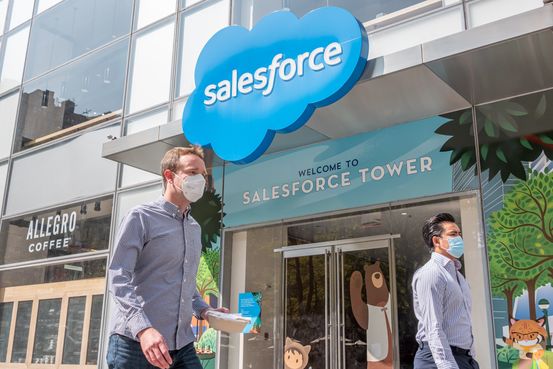 Salesforce.com Inc. agreed to buy messaging company Slack Technologies Inc. in a $27.7 billion deal that shows how the biggest players in cloud computing are racing to add muscle amid the pandemic’s remote-work boom.

The cash-and-stock deal, announced Tuesday, is the biggest move yet by Salesforce Chief Executive Marc Benioff, a pioneer in selling subscriptions for software run on remote servers, to turn the company he co-founded 21 years ago into a broad-reaching powerhouse in tech tools for businesses. The deal is almost twice as large as Salesforce’s largest acquisition so far and would turn the combined company into a more formidable competitor to Microsoft Corp. and Google parent Alphabet Inc. The Wall Street Journal previously reported Salesforce and Slack were in advanced deal talks.

The combination also brings together two of the tech industry’s highest profile CEOs—people who have made a career of taking on Silicon Valley icons. Mr. Benioff has positioned himself as a prominent voice in U.S. business, using venues like the World Economic Forum in Davos, Switzerland, to champion causes and burnish his profile. He set up Salesforce with a pledge of corporate giving and bought himself an even larger platform with his acquisition of Time Magazine two years ago.

Slack CEO Stewart Butterfield has been one of the loudest voices arguing that companies need to revamp how they use technology. He co-founded Slack, which grew out of a gaming company called Tiny Speck, and pitched its product as an alternative to office email. It quickly took off among developers in technology companies when it became publicly available in 2014. He is expected to join Salesforce and continue to run Slack as a unit of Salesforce after the deal’s close, the companies said.

The purchase, which still has to clear Slack shareholder and regulatory approval, would be Salesforce’s largest ever acquisition. It also would underpin Mr. Benioff’s effort to move Salesforce beyond its core product, which helps companies manage their customer relationships, to providing the software tools that businesses need for a swath of their day-to-day operations.