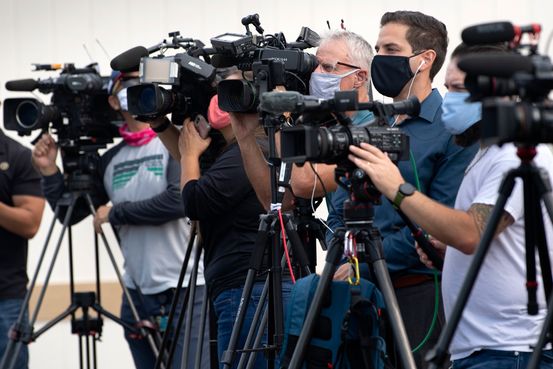 The Copper Courier in Arizona and the Decatur Times in Alabama both describe themselves as startup news sites helping to fill the void from the decline of local news outlets across the U.S.

In fact, they are both the fruit of partisan efforts to shape the news narrative, from the left and the right, ahead of the 2020 election.

The Copper Courier is part of a network of eight sites launched in battleground states, backed largely by Acronym, a liberal nonprofit with close ties to Democratic donors. Acronym has been building out the network, called Courier Newsroom, over the past 18 months. As of May, the sites had an $11 million budget and aimed to publish around 300 original articles and videos a week that it would promote aggressively on social media, according to documents reviewed by The Wall Street Journal.

Decatur Times is part of Metric Media, a network of sites with ties to well-established Republican donors and operatives, including the head of the GOP small-dollar fundraising operation, according to Federal Election Commission records and people familiar with the matter. Metric Media already has more than 1,000 sites, including many in swing states, that blend right-leaning news stories with news releases and data scraped from public databases.

The digital news landscape is filled with outlets that have a slant on the news. What separates networks like Courier and Metric Media is that they are targeting individual states and cities, hoping to capitalize on readers’ trust in local news sources for information on everything from coronavirus updates to politics. And they are doing that while playing down their partisan interests and often obscuring their donors.

Their rise, which comes as many local news organizations are radically downsizing or shutting down, is adding to an already noisy news marketplace where determining the provenance and accuracy of information is increasingly difficult for consumers.

“Today’s news consumer has to do a lot more detective work in order to ensure oneself that you’re being informed by legitimate news and information sources,” said Philip Napoli, a professor at Duke University who focuses on media and democracy. He said the local partisan news efforts are akin to journalism a century ago when party-driven newspapers with “Democrat” or “Republican” in their names gave one-sided news, unabashedly.

While audience data on partisan local sites are very limited—many are too small to be measured by independent firms—experts say both the left and the right are ramping up production of these networks ahead of the election. That growth has already prompted changes from

Google, which took steps in recent months to decrease the reach of such sites.

Acronym has been on a quest to remake progressive politics, led by 34-year-old founder Tara McGowan, who has strong ties to the Democratic Party. Besides the Copper Courier, other news sites in its network include Up North News serving Wisconsin and Cardinal & Pine in North Carolina, two key battleground states.

When reaching out to donors and others in a newsletter, Acronym said it was developing “trusted news online to counter the rise of misinformation and shuttering of local news sources.” Funders include the billionaire financier George Soros, LinkedIn co-founder Reid Hoffman and movie producers, people familiar with the matter said.

Ms. McGowan, who had a top role in a pro-Hillary Clinton super PAC in 2016, pitched Courier last year to a gathering of high-net-worth Democratic donors, saying that “the right is monopolizing” political-leaning news and Democrats need to have a counterweight, according to an attendee.

Acronym has around 60 reporters on the ground and about a dozen editors, according to people familiar with the matter.

NewsGuard, which tracks and rates news sites, warns readers to “proceed with caution” when reading Courier Newsroom sites, saying they are insufficiently transparent about their ownership and “cherry-picks facts to advance a Democratic narrative.”

Courier Editor in Chief Lindsay Schrupp said she disagrees with the NewsGuard rating. She said Courier tries to be transparent about its progressive bent and adheres to traditional journalism standards. “Our backers have no say in what and how we report,” she added.

Americans for Public Trust, a government-oversight nonprofit with GOP ties, said in an FEC complaint in September that Courier should register as a political committee, given its ties to Acronym.

Courier promotes its stories in social-media ads targeted at certain groups. Acronym told donors in May it found promoting its articles to voters with lower levels of political knowledge is effective, according to documents reviewed by the Journal. It has used Facebook to advertise stories promoting Democratic congressional candidates in several states, spending more than $300,000.

Facebook in August announced a policy change to curb the reach of politically backed news organizations on its platforms. The move, which affects sites on the left and the right, was driven by Chief Executive Mark Zuckerberg’s concern that Courier wasn’t a real news outlet, the Journal reported.

Ms. McGowan said at the time that the move unfairly targets Courier Newsroom and that “Facebook should immediately reverse this decision.” Facebook’s policy affects news networks on the left and right, and it is considering adding labels alongside their pages, a spokeswoman said.

On the right, Metric Media, whose local outlets have names like Decatur Times and San Mateo Sun, declares itself the largest local news publisher in the country. Top Metric Media stories are often based on news releases from Republican lawmakers, and present GOP officials in a flattering light.

NewsGuard warns readers to proceed with caution when reading Metric Media sites, which it said “falsely present themselves as locally based news sites” and “do not disclose their conservative agenda.”

Edward Greim, a lawyer for the Metric Media Foundation, which oversees Metric Media, said in a statement, the network “is not a right-leaning enterprise and it is categorically false that it was established for political purposes.” He said the sites have published “many articles that expose Republican candidates and elected officials for their misdeeds.”

Metric Media was built with the help of Brian Timpone, a conservative businessman, former Republican aide in Illinois and onetime TV reporter. His companies, including Locality Labs and Franklin Archer, have a history of doing work for power players in Republican politics, according to the Columbia University’s Tow Center.

Former Trump campaign and Republican National Committee official Gerrit Lansing has partnered with Mr. Timpone on Metric Media and advised him on local news projects, according to people familiar with the matter. He was recently involved in Metric Media’s fundraising discussions, the people said. Mr. Lansing is currently the president of WinRed, the Republican small-dollar fundraising organization.

Metric Media is controlled by a nonprofit foundation whose board of three includes Brent Southwell, a frequent donor to Republican candidates and causes who has been celebrated by far-right activists for a successful legal battle against a Dallas union chapter. Mr. Southwell didn’t respond to a request for comment. The foundation doesn’t disclose its donors. Mr. Greim said it would do so on tax documents when they are due.

The day-to-day operator of Metric Media is its general manager, Bradley Cameron, a Texas-based management and public relations consultant who in his early career served as an aide to Republican lawmakers. Clients of Mr. Cameron’s consulting firm, Situation Management Group, include companies as well as political groups such as the Citizens for Self-Governance, a conservative nonprofit, and the Cato Institute. Mr. Greim, the Metric Media lawyer, said that Mr. Cameron’s firm was nonpartisan.

According to FEC records, SMG received $1,400 in July from the Concerned American Voters PAC for “digital media services” in a Georgia Republican primary runoff. The day that payment was received, Metric Media’s Georgia Mountain News published a story critical of the candidate the PAC opposed. Five more stories followed, as did more money from the PAC, the FEC records show.

Mr. Greim said that SMG did no work on the race and received no payments related to it.

—Elisa Cho contributed to this article.