Civil rights attorney Lee Merritt testifies Tuesday during a Senate Judiciary Committee hearing to examine issues involving race and policing in the aftermath of the killing of George Floyd. 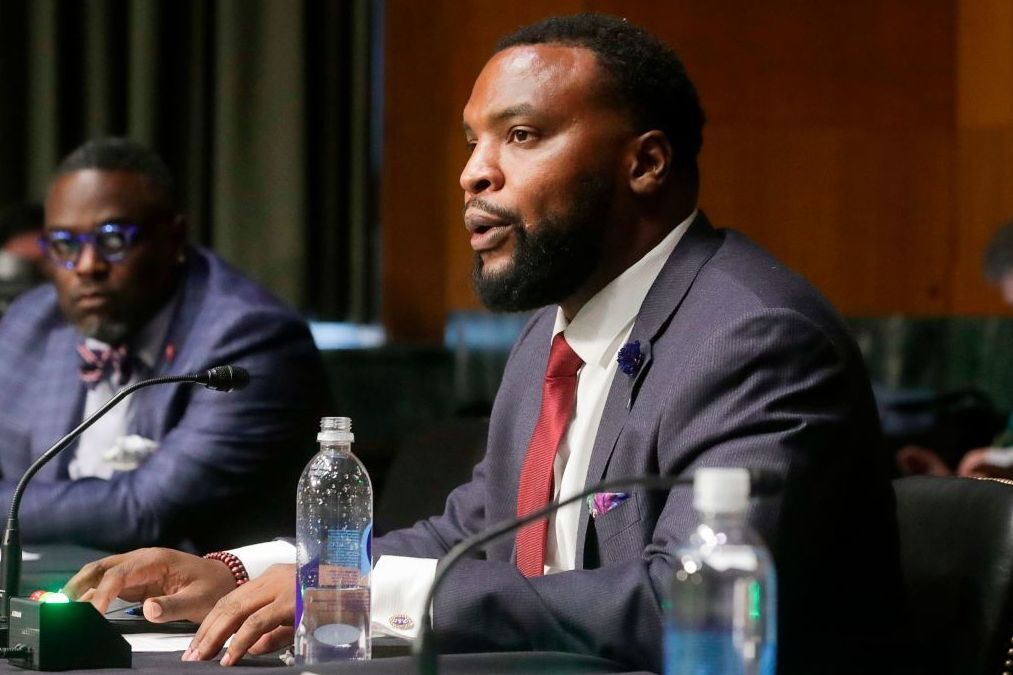 Civil rights attorney Lee Merritt testifies Tuesday during a Senate Judiciary Committee hearing to examine issues involving race and policing in the aftermath of the killing of George Floyd.

Questions of how to reform law enforcement in America have dominated Washington this week.

Civil rights attorney Lee Merritt has been a voice in that debate. He represents the family of Ahmaud Arbery, the 25-year-old black man who was pursued by three white men and then fatally shot while jogging in a South Georgia neighborhood in February. He is also co-counsel for the families of George Floyd and Breonna Taylor.

Merritt was at the White House on Tuesday when he and the families of men and women who had been killed by police met with President Trump before the signing of an executive order the administration says will address issues in the policing system. Merritt also testified at a Senate Judiciary Committee hearing on policing in America.

During the meeting with Trump — which Merritt says was difficult to accept — the president explained the executive order and Republican legislation on police reform, the attorney told NPR’s All Things Considered. There was not a lot of common ground, he said.

“The families didn’t really find too much in what he said in the EO [executive order] that would significantly change outcomes in their case,” Merritt said. “It was a conversation where we would exchange ideas, and he heard from the families, and the families heard from him.”

Here are excerpts from the interview:

After that meeting, the president gave a speech before signing this executive order. … Most of the speech was kind of a rousing endorsement of policing in America. … What went through your mind when you listened to that speech?

I have to tell you, I didn’t listen to the speech. I know what Trump’s rhetoric is often about. It was a difficult meeting to take in the first place. I know that he doesn’t feel like there’s systemic racism within our policing system. I know some of the things that we were fighting for specifically, like qualified immunity [which police officers can potentially use to shield themselves from liability in lawsuits], he had taken a position against. So the goal of the meeting really more than anything was for him to take stances like that while looking families in the face who had been killed by police misconduct without any form of justice.

As far as the executive order itself, which provides funding for more training for police officers, money for departments to hire social workers, a ban on chokeholds unless an officer fears for his or her life … you don’t think this executive order goes far enough.

No, it doesn’t go far enough, and I’m not sure that the office of the presidency can go far enough. We wanted to have the conversation, and it is actually important that [Sen.] Tim Scott, who was been drafting the Republican response to the Justice [in] Policing Act offered by the [Democratic-controlled] House was there and that he could hear these stories as well.

I don’t want to discount the executive order. There were some things beneficial to these families that did take place in it. A lot of the families, their loved one was suffering some sort of mental health crisis that didn’t allow them to comply the way officers expected them to. And as a result, they were shot and killed. … [Trump’s] executive orders say that maybe officers should have a co-responder system where they respond to people in mental health crises or homelessness or people who are suffering from addiction with something other than guns. And we think that is extremely helpful if it’s implemented throughout the states.

Listen to the full interview at the audio link above.