This screen grab taken from body camera video provided by the Atlanta Police Department shows Rayshard Brooks speaking with Officer Garrett Rolfe in the parking lot of a Wendy’s restaurant on June 12 in Atlanta. Rolfe has been fired following the fatal shooting of Brooks, and a second officer has been placed on administrative duty. 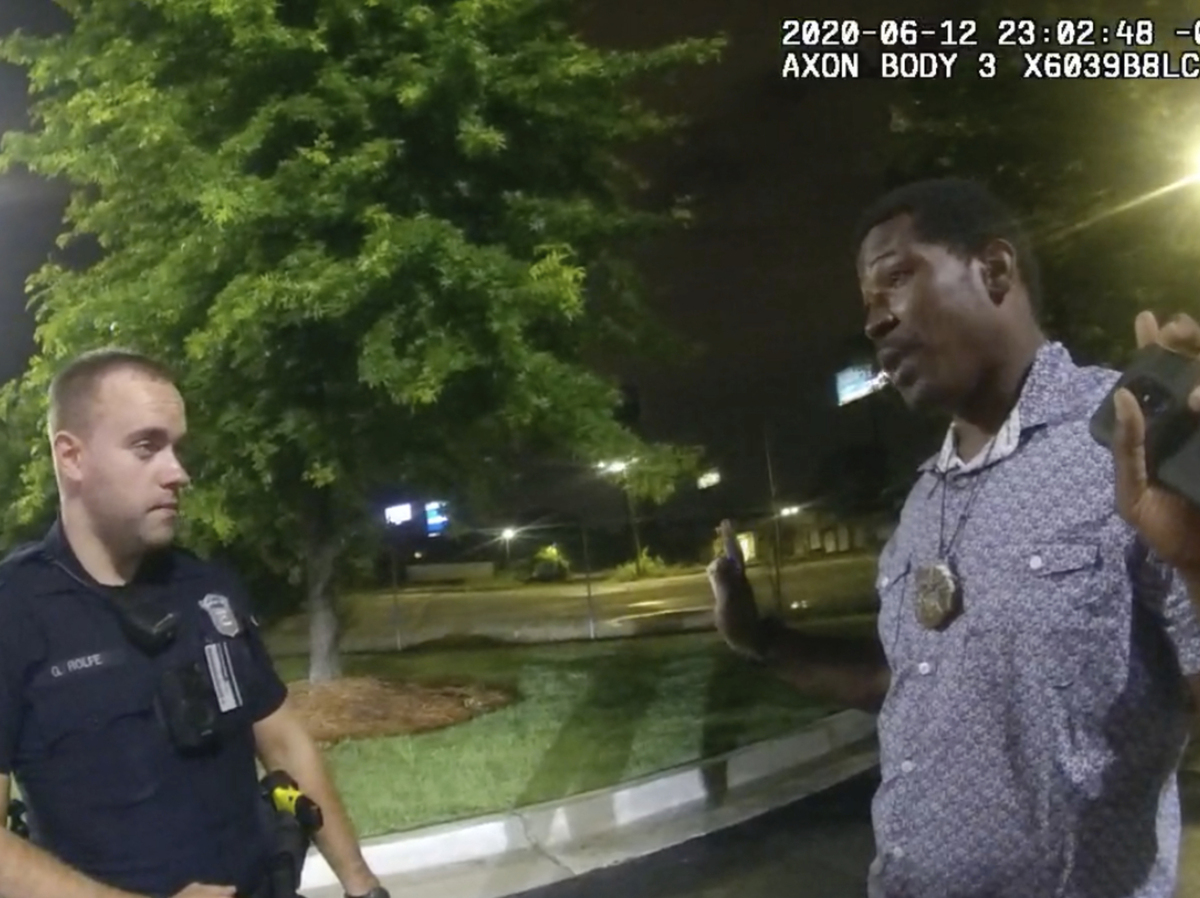 This screen grab taken from body camera video provided by the Atlanta Police Department shows Rayshard Brooks speaking with Officer Garrett Rolfe in the parking lot of a Wendy’s restaurant on June 12 in Atlanta. Rolfe has been fired following the fatal shooting of Brooks, and a second officer has been placed on administrative duty.

The white Atlanta police officer who shot a 27-year-old black man in the back last week in the parking lot of a fast-food restaurant will face a charge of felony murder and 10 other charges, a Georgia county prosecutor announced Wednesday.

Fulton County District Attorney Paul Howard said Garrett Rolfe, who fired the fatal shots at Rayshard Brooks, could face a possible sentence of life without parole or the death penalty.

Rolfe, who has since been fired from the police department, was also charged with aggravated assault with a deadly weapon and violations of office.

The other officer, Devin Brosnan, who remains with the Atlanta Police Department and has been placed on administrative desk duty, is also facing charges. Among them is aggravated assault, which carries a possible sentence of one to 20 years in prison.

Arrests warrants have been issued for both men.

The decision to bring charges comes five days after the officers were called to a Wendy’s fast-food restaurant. They found Brooks asleep in his car, and he admitted to officers that he had been drinking earlier.

Video released by police over the weekend shows that Brooks was speaking with officers for nearly a half-hour. It includes him doing a field sobriety test, which he failed.

Things took a turn when the officers attempted to put handcuffs on Brooks. He was able to grab the stun gun of one of the officers and started to run off.

Then, Rolfe pulled up his service weapon and fired.

Howard, the Fulton County district attorney, said during a news briefing that Brooks “never presented himself as a threat.”

“At the very beginning, he was peacefully sleeping in his car; after he was awakened by the officer, he was cooperative; and he was directed to move his car to another location. He calmly moved his car,” Howard said.

He also noted that for a period of more than two minutes after he was shot, “there was no medical attention applied to Mr. Brooks.”

Georgia officials also said that Rolfe kicked Brooks while he was on the ground.

In filing charges, Howard said, prosecutors relied in part on a statement made on the video by Rolfe, “I got him.”

Officials said Brosnan, the other officer, stood on Brooks’ shoulder after he was shot. According to Howard, Brosnan has cooperated with the investigation.

Tomika Miller, Brooks’ widow, said a separate briefing Wednesday evening she was “very grateful” the district attorney was providing “the truth” of what happened to her husband that night.

“I was very hurt,” Miller said through tears when asked what was going through her mind about what officers did to Brooks before medical aid was called.

“I can’t imagine being there because I don’t know what I would have done if I would have seen that for myself,” Miller said. “I felt everything that he felt just by hearing what he went through.”

An attorney for Brooks’ family said it would be a long journey before justice could be served.

“This is not the finish line, this is the starting point,” attorney Justin Miller said. “Step two is convictions on all charges. And then after that, we have to find a way to try to make things right for the Brooks family.”

Brooks’ killing comes as protests continue across many U.S. cities to call attention to systemic racism and social injustices, including police brutality on communities of color.

Those protests coincide with the recent high-profile killings of black Americans by law enforcement, including George Floyd in Minneapolis and Breonna Taylor and David McAtee in Louisville, Ky. A former police officer is among those accused of murdering Ahmaud Arbery in February in Glynn County, Ga.

In the case of McAtee, Kentucky officials said last week that the investigation is ongoing. Officials also determined that the fatal shot, on June 1, came from the Kentucky National Guard, which was working with police.

Atlanta Mayor Keisha Lance Bottoms said during a Monday news conference that Brooks’ death “angered me and it saddened me beyond words.”

“Friday evening we saw the murder of Rayshard Brooks,” Bottoms said. “It is clear that we do not have another day, another minute, another hour to waste.”

Over the weekend, the mayor accepted the resignation of Police Chief Erika Shields. As Georgia Public Broadcasting reported, a nationwide search for her replacement is underway, and the mayor has said that Shields will serve in a role that is “to be determined.”

There is also reporting from the Atlanta Journal-Constitution and The Guardian indicating that Rolfe, the officer who killed Brooks, was previously reprimanded for his use of force.

The Atlanta Journal-Constitution reported that Rolfe received a written reprimand in 2017 for using his firearm. His file, according to the paper, included a dozen other incidents ranging from vehicular accidents to complaints from citizens.

“He was exonerated in nine of those internal investigations,” the newspaper reported.

The Guardian reported about a 2015 incident in which Rolfe and two other officers shot at Jackie Jermaine Harris, who was caught driving a stolen vehicle. Harris rammed a law enforcement vehicle, the paper reported, and the officers shot at him multiple times.

“However, the shooting was not reported by the police involved,” The Guardian added. “Harris, like Brooks, is African American.”