Michael Blackson went to protests a couple of days during the first week of June. He also voted for the first time on June 2. 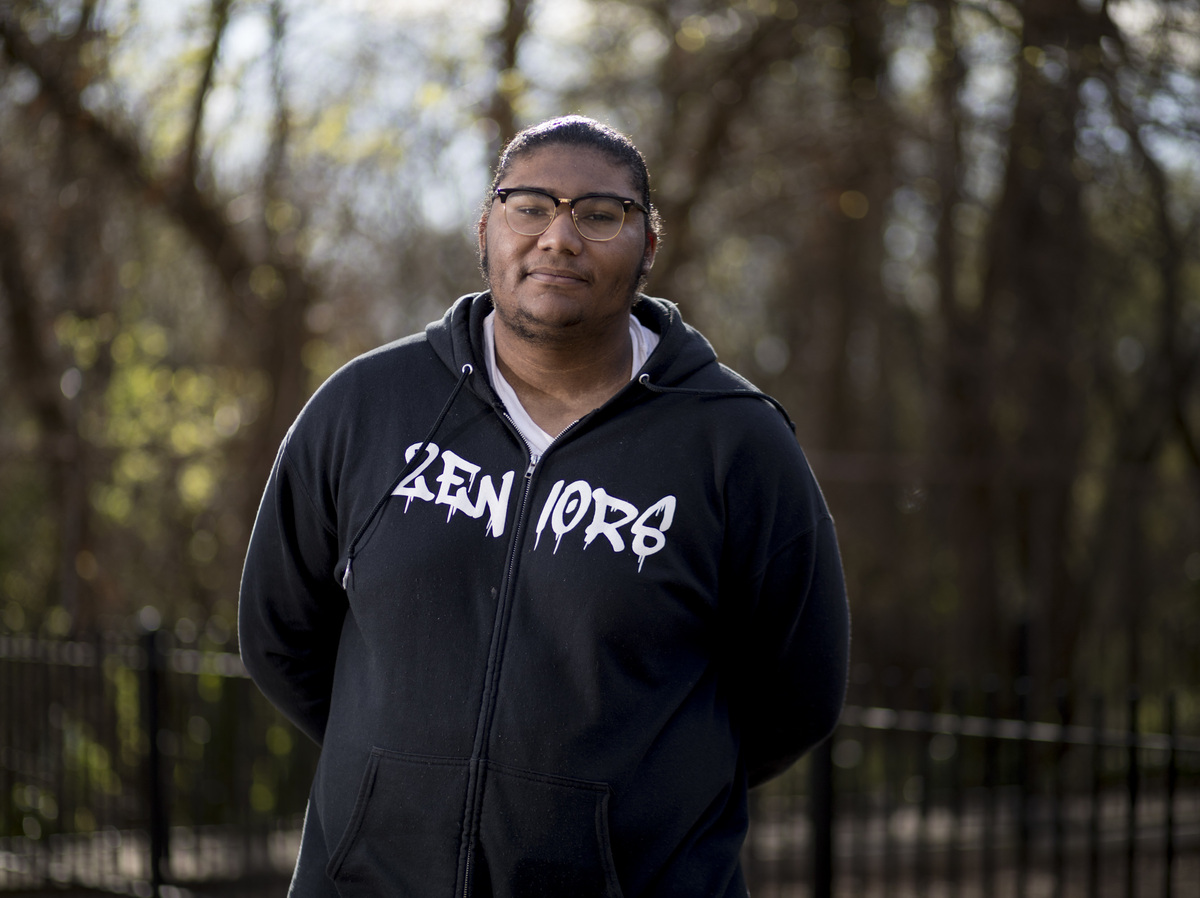 Michael Blackson went to protests a couple of days during the first week of June. He also voted for the first time on June 2.

Michael Blackson, a 17-year-old high school senior from Southeast D.C., was among the thousands of people protesting racism and police brutality in front of the White House recently.

In the shaky video footage Michael took with his phone, you can see rows of federal police in riot gear, just on the other side of the black chain link fence. Beyond the police: Lafayette Square, and the White House. All along the fence protestors are yelling expletives at the stony-faced police. Then you can hear Michael’s voice from behind the camera.

“Listen, you guys are human first,” he says. Amid all the noise, he tries to get through to the one officer closest to him.

“Sir! I respect you,” Michael says through the fence. The officer is white. He’s wearing khaki camouflage, helmet and sunglasses, and what appear to be canisters of tear gas dangling from his uniform. He turns to Michael, and nods, almost imperceptibly, before turning away.

Michael says that moment has stuck with him. He made a connection through the fence, however brief and silent.

“I just wanted to have a dialog, that’s all I wanted. But he just like nodded, and that was enough for me.”

Michael Blackson tried to connect with a police officer through the fence in front of the White House during the protests.

Michael has hardly left his apartment since the pandemic started, and D.C. school shut down, in mid-March. He has spent his days doing school work online on Google Classroom, playing Playstation 4, bored and waiting for graduation. So, it was a big deal to suddenly be downtown surrounded by a crowd — history in the making.

But things went downhill after that connection through the fence.

One of the friends Michael was with got pepper-sprayed.

When asked about the context — did his friend do anything to provoke police? — Michael took issue with the question. He said there was an assumption hidden within it.

“Why is that always the first question? Police are behind gates, heavily armored. They have shields, batons, tasers, guns.” His friend and the rest of the crowd were peaceful, he said.

He said he hears the same kinds of questions about George Floyd, killed by Minneapolis Police.

“Was George Floyd a criminal? What did he do in the first place to get his neck get kneeled on?” he asked.

Michael said a better question would be: “What didn’t the cop do to save his life? He didn’t get off his neck. He didn’t do that.”

Michael said when he saw the video of George Floyd’s killing it made him sick to his stomach. But as a young black male in American, he said he wasn’t surprised. He said when he’s in whiter parts of D.C., he can feel people’s uneasiness — they will even cross the street.

“Most white people are intimidated by me and afraid of me, but they don’t know me. It makes me feel like an antagonist in my own story.” Michael is big — he’s 6’4″. But he’s also kind, and gentle and not someone to be afraid of.

“If you guys only knew who I am, if you guys just see me as a human first,” he said.

First-time voting, and a mini-graduation

Michael went to protests a couple of days in that first week of June. On June 2, after participating in democracy on the streets, he participated in democracy in a voting booth.

He lives in D.C.’s Ward 8, one of the poorest parts of the city which also tends to have the lowest voter turnout rate. For Michael, it was especially important to vote now, with everything going on in the country.

“It’s really showing your democracy, and if I didn’t show my democracy, that would’ve been a hypocrisy,” Michael said. “Can you please quote that?”

Michael says he often feels invisible, especially to white people. But not lately — first, protesting, right in front of the White House fence, then voting, to help choose the next president of the United States.

On June 10, Michael marked another big milestone — sort of.

It was the day at Michael’s high school for seniors to return textbooks, clear out their lockers and pick up caps and gowns. His mom, Meschel, lined up with a couple dozen other parents on the sidewalk in front of the school, Thurgood Marshall Academy in D.C.’s Anacostia neighborhood. One by one, the soon-to-be graduates emerged in their burgundy robes.

Michael Blackson and other students picked up their cap and gowns recently. Michael graduates with honors on June 19. 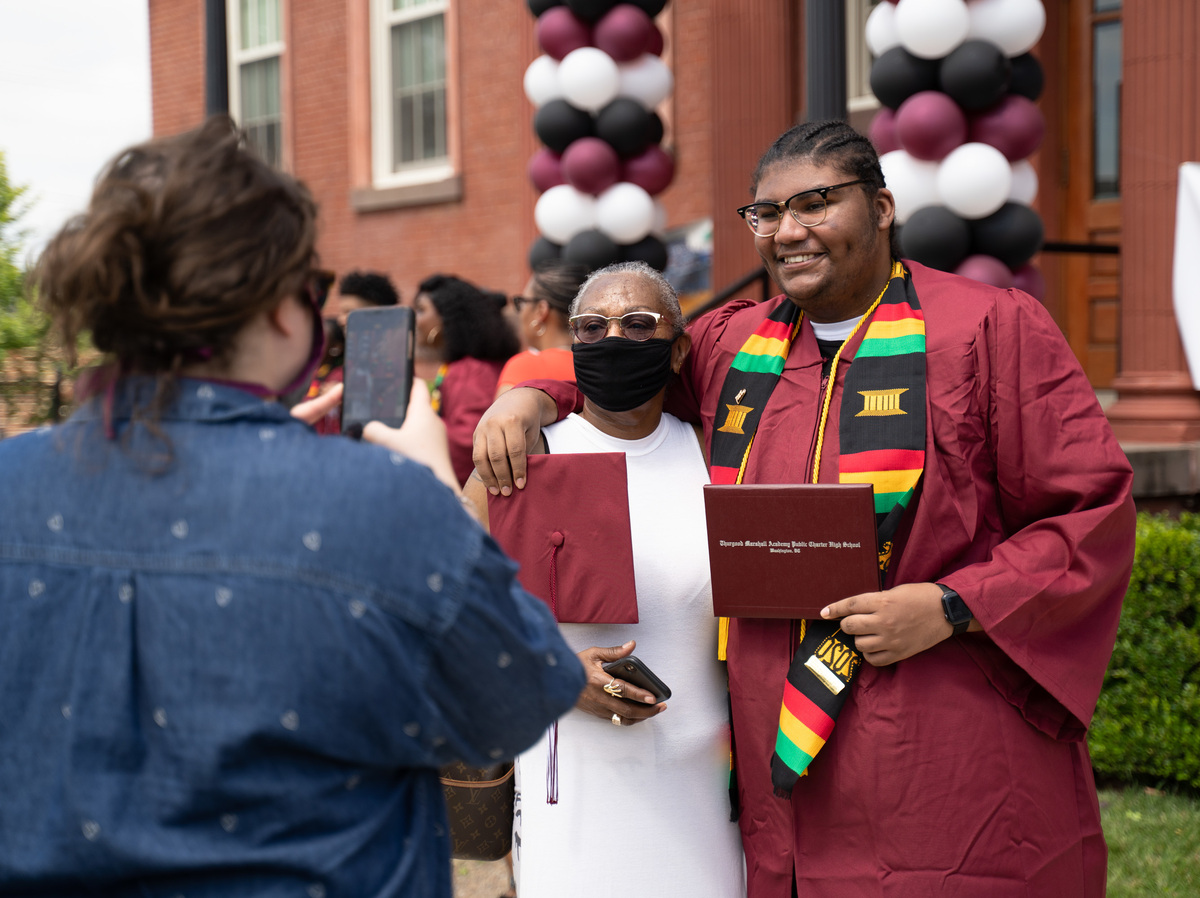 Michael Blackson and other students picked up their cap and gowns recently. Michael graduates with honors on June 19.

“When Michael and I pulled up, we kinda looked at each other, and just were like, ‘Really, this is it?'” Meschel said.

The real graduation will be online on Friday. But the cap and gown pickup day turned into a mini-graduation of sorts — the only time to get together in person to celebrate. Some parents brought balloons; passing cars honked. Michael wore a yellow cord — he’s graduating with honors.

“I don’t even know what to say or think. This is crazy. It’s amazing,” Michael said, between cheers for classmates.

Michael is headed to college in August, at SUNY Cortland. But he still doesn’t know if that will mean packing up a car and driving to New York, or if he’ll be starting his college career on a laptop in his bedroom in D.C.