Philonise Floyd speaks to the Human Rights Council in Geneva via video Wednesday, nearly a month after the killing of his brother George incited widespread protests against police brutality. Michelle Bachelet, the U.N. high commissioner for human rights, looks on behind her face mask. 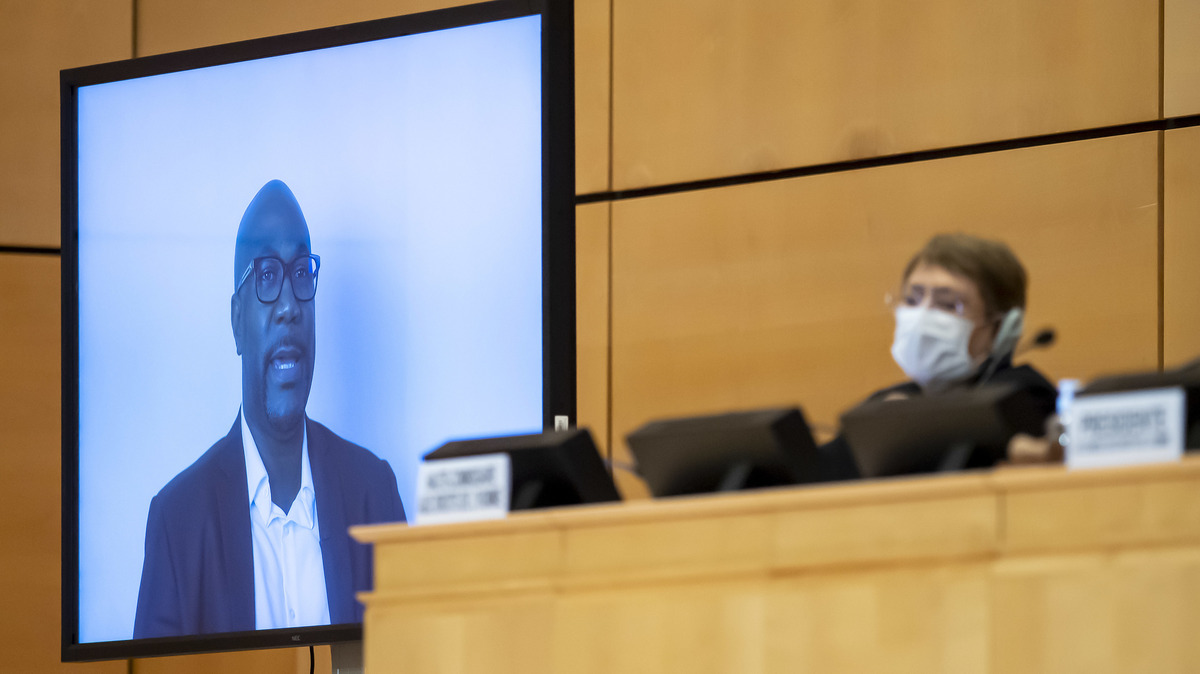 Philonise Floyd speaks to the Human Rights Council in Geneva via video Wednesday, nearly a month after the killing of his brother George incited widespread protests against police brutality. Michelle Bachelet, the U.N. high commissioner for human rights, looks on behind her face mask.

George Floyd struggled desperately to make himself heard during his arrest. With a Minneapolis police officer’s knee planted on his neck for more than eight minutes, he pleaded for help, said he couldn’t breathe — and finally, fell silent.

On Wednesday, some three weeks after Floyd’s killing, his brother raised a voice on his behalf in a message to international diplomats.

“My brother, George Floyd, is one of the many black men and women that have been murdered by police in recent years. The sad truth is that the case is not unique,” Philonise Floyd told the U.N. Human Rights Council in a remote address Wednesday.

“The way you saw my brother tortured and murdered on camera is the way black people are treated by police in America. You watched my brother die. That could have been me.”

During a quickly convened session of the Human Rights Council in Geneva, Floyd asked the group to set up a commission of inquiry into racism and police brutality in the United States — specifically, “police killings of black people and America and the violence used against peaceful protesters.”

Under U.N. guidelines, commissions of inquiry are in effect fact-finding missions. They are aimed at not only gathering information, but also recommending “measures to redress violations, provide justice and reparation to victims, and hold perpetrators to account.”

The Office of the High Commissioner for Human Rights has pursued dozens of international commissions of inquiry over the past three decades, from Rwanda to Syria.

“We should go beyond existing recommendations. We need to build on what has worked from the enormous body of work and experience we already have,” she told the assembled diplomats. “Time is of the essence. Patience has run out. Black lives matter. Indigenous lives matter. Their life with people of color matter. All human beings are born equal in dignity and rights.”

The conversation unfolded without an official U.S. representative present, because the Trump administration withdrew from the Human Rights Council roughly two years ago. Nikki Haley, then the U.S. ambassador to the U.N., pointed to the membership of countries such as China and Venezuela and dismissed the council as “a hypocritical and self-serving organization.”

So on Wednesday, Ambassador Andrew Bremberg, the U.S. representative in Geneva, looked on from afar as the 47-member body took up a debate proposed by a group of African states led by Burkina Faso.

“We are not above scrutiny; however, any HRC resolution on this topic that calls out countries by name should be inclusive, noting the many countries where racism is a problem to be addressed,” Bremberg said in comments emailed to NPR. And he alluded to violence and discrimination practiced by some of the council’s member states.

“It is time,” Bremberg added, “that those regimes, and others like them, be held accountable by the Council and the world.”