Almost two weeks before the reopening, teacher Jane Cooper used a two-meter length of ruler and pipe to check seat spacing in her classroom at Lostock Hall Primary school in Poynton near Manchester, England. 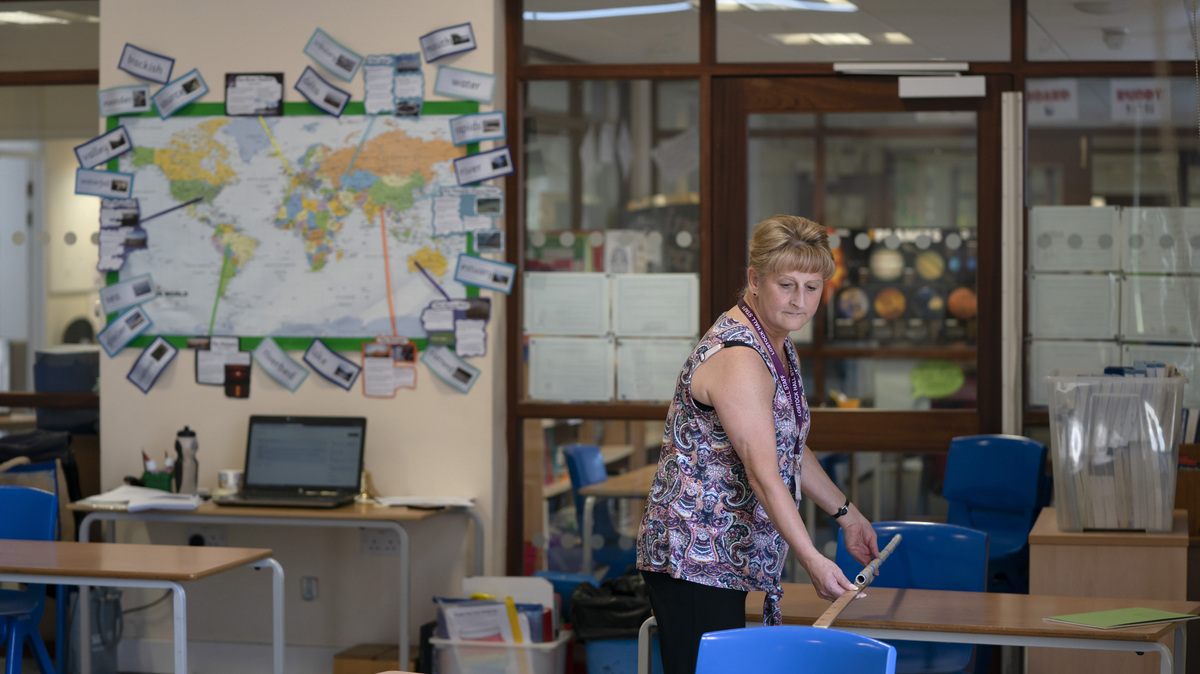 Almost two weeks before the reopening, teacher Jane Cooper used a two-meter length of ruler and pipe to check seat spacing in her classroom at Lostock Hall Primary school in Poynton near Manchester, England.

Grade schools in the United Kingdom began a staged reopening Monday, welcoming back the first wave of students since closing in late March to all but vulnerable children and children of essential workers.

The reopening comes as the government begins to ease other restrictions, now allowing groups of up to six people from different households to convene in private outdoor settings like gardens with appropriate social distance. The rate of daily coronavirus cases in the U.K. is on a downward trend, but the country continues to report around 4,000 new cases per day, according to a New York Times tracker.

Now, as primary schools invite back more than 2 million children across three grades, experts say they expect about half of parents to continue keeping children at home, according to a survey published Monday by the National Foundation for Education Research.

Geoff Barton of the Association of School and College Leaders estimates that attendance will range from 40% to 70% in schools reopening this week. Some schools allowed to reopen Monday have chosen to remain closed due to safety concerns.

“Our early impression is that the picture on the wider opening of primary schools is very mixed, according to a range of factors, such as different approaches by local authorities, constraints on the space available in schools to accommodate eligible pupils while implementing the safety protocols, and the availability of staff,” Barton said in a press release Monday.

That survey also found that more than 60% of school leaders feel unprepared for some aspects of reopening, including managing students’ movement and reorganizing spaces to allow for social distancing.

“The Prime Minister’s display of determination to press ahead with the wider reopening of schools from 1 June is seriously at odds with the scientific evidence released to date, and the deep concerns expressed by schools, teachers and parents,” NASUWT General Secretary Dr. Patrick Roach said last month.

The Government has yet to reassure parents and teachers that opening schools from 1 June will be safe and now appears to accept that many schools will not be able to reopen on that date.

Still, in an interview with the Express & Star Monday, Education Secretary Gavin Williamson maintained that reopening schools is safe and now necessary for students.

“All schools need to start opening up,” he said. “It is in the interests of the children’s learning and well being.”

It is time to start bringing some of our children back to school in the interests of their welfare and education. This will be done carefully and in a phased way.https://t.co/FIsjTetY9d

Additional primary and secondary schools are slated to resume classes later this month, according to the Department of Education.