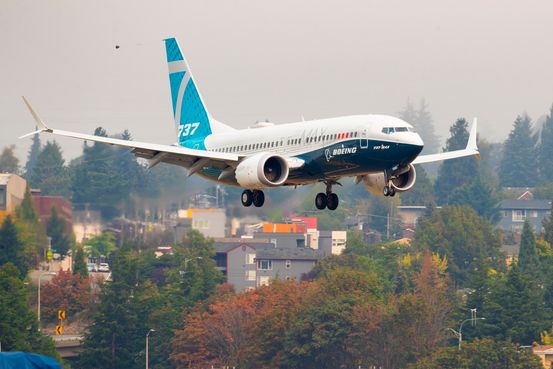 rose more than 5% Friday morning as comments from the top European aviation-safety official reinforced investors’ sentiment that the company’s troubled 737 MAX jetliner was on track to return to service in coming months.

“Our analysis is showing that this is safe, and the level of safety reached is high enough for us,” Mr. Ky said. A spokeswoman for the EASA, as the European safety agency is known, confirmed the remarks he made to Bloomberg.

The 737 MAX, the latest iteration of Boeing’s long-running series of narrow-body airliners, was grounded by regulators world-wide more than a year and a half ago after it was involved in the dual tragedies a few months apart. U.S. regulators, who are taking the lead vetting hardware, software and pilot-training changes for the fleet, are moving to formally lift the grounding in coming weeks. Mr. Ky’s comments are in line with that general timeline, projecting a European decision perhaps weeks later and gradual resumption of widespread MAX commercial operations early next year.

A total of 346 people died in the two accidents: an October 2018 crash of a jet operated by Lion Air, and a March 2019 crash of a plane operated by Ethiopian Airlines.

Last month, Steve Dickson, the head of the U.S.’s Federal Aviation Administration, gave Boeing’s changes to the jet a tentative endorsement after test-flying it along with Boeing and FAA pilots.

“We still have some work to do yet” to respond to public comments and finalize revisions, Mr. Dickson said after the flight.

Scrutiny of the MAX has focused on an automated flight-control system that malfunctioned due to erroneous sensor inputs and overwhelmed pilots’ inputs before the fatal crashes.

The EASA spokeswoman said a directive allowing the MAX’s return to service could follow a public comment period likely to begin next month.

Boeing’s push to bring the jets back to airline service this year played out against a devastating period for the global aviation industry as passenger travel evaporated during the Covid-19 pandemic. Boeing shares are down more than 48% year to date.