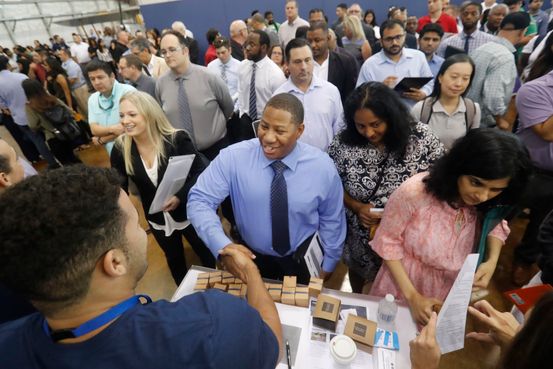 Racial disparities in technology-industry salaries persist despite promises made by many companies to seek out and elevate diverse talent, according to a new survey from Hired Inc.

Job seekers who identified as black or Hispanic tended to both expect and receive lower salary offers than their white and Asian peers over the past year, according to the recruitment marketplace.

It was the fourth year in a row the company’s reporting found such gaps, Hired Chief Executive Mehul Patel said in an email.

“Ultimately, it’s going to take an industrywide commitment from all companies to achieve truly equitable salaries for all,” Mr. Patel said.

Hired’s report compiled data from 10,000 companies and 98,000 candidates for roles that include software engineering, product management and data science. The analysis estimated that salaries for front-line tech workers grew in every major market in the U.S. last year, averaging $146,000 annually.

The wage gaps are emblematic of broader power imbalances within corporate offices and U.S. culture that have come under closer scrutiny since the killing of George Floyd in police custody in Minneapolis last month, said Peter Beasley, executive director for Blacks in Technology, a professional organization.

“You know to ask for less, because that’s your only option,” Mr. Beasley said. “It’s learned. It’s been taught.”

But the number of people who identify as black or Hispanic in many roles still lags behind Census Bureau estimates of the population, according to 2019 data analyzed by the Computing Technology Industry Association.

African-Americans, which make up a 13.4% slice of U.S. residents, hold 7.8% of information technology roles, according to the trade group. Despite 18.3% of the population identifying as Hispanic, people from the demographic group hold 7.3% of information-technology jobs.

Ron Gonzales, president and chief executive of the Hispanic Foundation of Silicon Valley, said that current efforts to seek out diverse candidates, and to retain employees from underrepresented groups and elevate them into higher roles hasn’t matched many companies’ highflying public statements.

“Based on the current pace of change, it literally would take decades to get this issue corrected,” said Mr. Gonzales, whose nonprofit provides education and scholarships for students seeking degrees in science, technology, engineering and mathematics.

Improving salary transparency would be a key first step for companies to address pay gaps, said Chloé Rice, co-founder of We Build Black, a nonprofit organization focusing on empowering black technologists. Deep-pocketed firms that often point to the difficulty of finding diverse talent also should invest in creating it, she said.

“If these companies really want to fix their pipeline problem, they need to start by creating that pipeline and really putting their money where their mouth is,” Ms. Rice said.