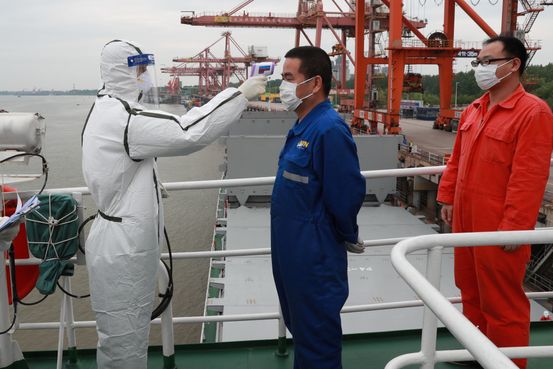 Several nations have agreed to ease border restrictions to allow for the repatriation of hundreds of thousands of sailors who have been stranded for months as a result of coronavirus-related lockdowns.

The countries, including the U.S. and 12 other nations, will recognize seafarers as essential personnel, making it easier for them to board flights and to move to and from ships.

“After months of this crew-change crisis getting worse, governments must do their bit,” said Stephen Cotton, general secretary of the International Transport Workers’ Federation. “That means that port states where ships dock, flag states where ships are registered, transit hubs with airports and the home countries of seafarers all need to make visa, quarantine and border exceptions for seafarers now, not tomorrow, not next week.”

In addition to the U.S., Denmark, France, Germany, Greece, Indonesia, the Netherlands, Norway, the Philippines, Saudi Arabia, Singapore, the United Arab Emirates and the U.K. agreed to the change in rules for ship crews.

China hasn’t signed onto the agreement but shipping industry officials say most crew changes for ships routed through Asia take place in Singapore and Dubai.

Some 150,000 sailors fly around the globe each month to connect with ships to replace colleagues that have been at sea for months. The widespread travel restrictions countries have imposed to rein in the spread of the coronavirus have made their travel nearly impossible, while their replacement crews are stuck on land without work.

The international Maritime Organization, a United Nations body that regulates global shipping, estimates there are 200,000 mariners waiting to be replaced. The IMO and shipping companies say the situation is creating a humanitarian crisis, with crew members facing growing health problems under the strain while safety standards are threatened as seafarers face stresses and exhaustion.

“I had an infected tooth for months, the pain was terrible so the captain gave me two shots of rum and pulled it out with a pair of pliers,” said Constantin Barbaneagra, a Romanian mechanic on a container ship off Sri Lanka. “The second officer ran out of heart medication and a Philippine colleague missed his daughter’s wedding. We are all exhausted, we need to get home.”

Shipping executives said some sailors on international sailings have been waiting to be replaced for up to 10 months because their contracts were near expiration when the border restrictions were imposed.

“It is unacceptable that there remain thousands of people stranded around the world and we owe it to them and their families to change things,” U.K. Transport Secretary Grant Shapps said Thursday. “Today marks a new chapter for seafarers and alongside our international partners, we are taking a stand to end the bureaucracy preventing men and women around the world from returning home.”