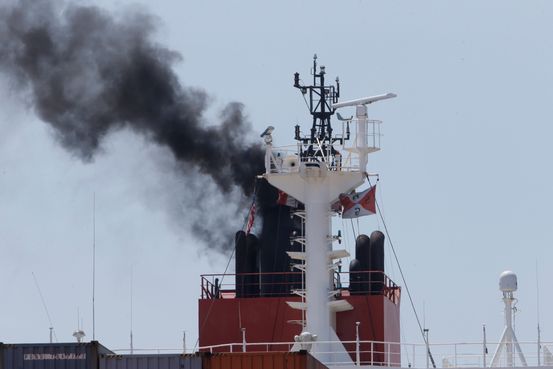 Shipowners have invested billions of dollars retrofitting vessels with sulfur trapping exhaust systems to abide by stricter clean air rules, but their investment may not pay off as oil prices stay low and cleaner fuels become more available.

The systems, called scrubbers, allow ships to continue burning the heavy oil known as bunker fuel that has long powered the world’s oceangoing vessels. The fuel is cheaper than low-sulfur fuel blends that hit the market at the start of the year, when ships were mandated to cut their sulfur emissions by more than 80%.

That order is part of the wider plan the International Maritime Organization, the global marine regulator, is rolling out to cut overall ship pollution by half over the next 30 years.

The requirement presented a stark financial choice for shipowners, so many have bought scrubbers at a cost of between $2 million and $4 million each rather than pay for low-sulfur, high-cost conventional fuel.

But there is a catch. Scrubbers make financial sense if the price spread between heavy oil and the cleaner fuels is more than $100 per ton. With oil prices at historic lows on falling demand from the Covid-19 pandemic and the world oversupplied with crude, the difference is now hovering at around $60 per ton.

That has left the scrubber market effectively frozen and operators with the gear outfitted on their vessels facing a longer timeline for the equipment to pay off.

“We are facing a dramatic fall for retrofits, 20% of what it was previously. There is hardly anything moving,” said Tamara de Gruyter, head of marine systems at Finland-based maritime equipment supplier

“But even with the low fuel spread, the price dynamics are still supportive to install scrubbers in new vessels.”

Wartsila said this week it faces a 10% drop in revenue this year after reporting a 30% decline in third-quarter sales from a year ago at its marine systems unit, to $197 million. Service sales rose 6% but equipment sales fell by 41% on fewer scrubber deliveries.

Maritime publication Lloyd’s List estimates that shipowners have spent roughly $6 billion to install scrubbers. The International Energy Agency says that by 2025 there will be some 5,000 ships using the systems, covering about 30% of the world fleet in terms of tonnage.

The devices typically last for around seven years, after which operators will shift to low-sulfur fuels.

When scrubber technology was introduced a few years ago, many owners saw it as a way to sidestep an increase in spending on fuel that typically accounts for up to half of a ship’s operating costs.

In late 2019, the gap between traditional bunker and cleaner fuel touched $300 per ton. Scrubber orders poured into manufacturers like Wartsila, Sweden’s

“We’ve put them in 30 of our 64 ships,” said Lars Barstad, interim chief executive at Norway-based

, one of the world’s biggest tanker operators. “We haven’t installed any in the last couple of months, because it doesn’t pay, but oil prices will rise at some point and things can change.”

Tumbling passenger airline demand as a result of the coronavirus pandemic slashed demand for middle distillates such as aviation fuel, however, and low-sulfur fuel for ships very quickly became plentiful early this year. Its cost also dropped.

During the first half of the year, low-sulfur fuel oil accounted for 71% of total Singapore ship fuel sales, compared with 18% for heavy oil and 11% for other fuel types, according to industry trade body Bimco.

Bimco estimates that 20% to 26% of the global fleet in terms of tonnage uses scrubbers, which are popular with tankers, dry-bulk carriers, container ships and cruise liners that sail on long voyages.

But early expectations that scrubber investments could be recovered within 12 months have disappeared.

Scrubbers cost on average about $2 million to install on a new ship and retrofits of older vessels are more expensive. Scrubber companies expected the bulk of their sales to come from new ship orders, but sales of new ships are at their lowest level in five years because of the pandemic.

“We put them on six big ships last year and have so far recovered about 65% of the cost,” said a Greek owner of more than 20 vessels. “Oil prices need to go up more than 10% for scrubbers to make sense. It may happen, but in hindsight, we probably made the wrong bet.”