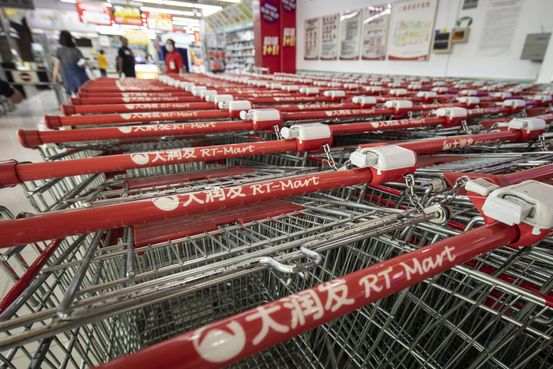 said it would pay $3.6 billion to take control of China’s largest big-box retailer and a major rival to

in the world’s most populous nation.

The coronavirus pandemic, which kept many people confined to their homes for long periods, has accelerated a shift by consumers to online shopping. Like in the U.S., supermarket sales in China have been one of the retail industry’s bright spots, thanks to consumers stocking up on food and other household essentials during government-mandated closures of many restaurants and eateries. The country’s supermarkets have seen rapid growth in online orders this year and are trying to capitalize on the change in consumer behavior.

Alibaba first bought a 36% stake in Sun Art for about $2.9 billion back in 2017. The Hong Kong-listed company started off as a French-Taiwanese venture that operates stores in China under the RT-Mart and Auchan brands.

Sun Art isn’t a household name in China, but the big-box stores it operates sell everything from groceries to clothing and toys, and had a 14.1% share of the country’s hypermarket sales last year, according to Euromonitor International.

Walmart, in comparison, had a 10.3% market share of the category, which according to Euromonitor counts retail outlets with selling space in excess of 2,500 square meters, equivalent to 26,910 square feet. The American retailer back in 2016 sold its Chinese e-commerce website to

Alibaba, which has a booming and fast-growing online retail business, has been building its presence in physical grocery stores in China, and using them to extend its e-commerce capabilities.

The company currently owns Freshippo, a growing supermarket chain with more than 220 stores across the country selling fresh produce and other groceries. Shoppers can visit the stores in person or make online orders that are delivered within hours. The Freshippo chain was the brainchild of Alibaba’s Chairman and Chief Executive Daniel Zhang, who said sales at its stores that have been open at least a year grew in double-digit terms during the three months to June, thanks in large part to increased online orders during the pandemic.

Taking control of Sun Art would help Alibaba further expand its “New Retail” strategy which integrates online and offline resources, the company said Monday. There could also be other synergies across Alibaba’s other businesses, Mr. Zhang said in a statement.

said in a research note Monday. They said Sun Art recently reported a jump in online sales, and the retailer’s past collaborations with Alibaba—which include using Alibaba’s delivery services—have already helped it gain new customers.

Having a bigger network of physical supermarkets will boost Alibaba’s inventory space for groceries and its delivery capabilities, said Jason Yu, managing director of Greater China at Kantar Worldpanel.

Alibaba is boosting its stake in Sun Art by purchasing the majority of a holding company from France’s Auchan Retail International SA Shares of Sun Art jumped 19% on Monday, giving the retailer a market capitalization of about $11.6 billion. The company is likely to remain listed in Hong Kong.

one of Europe’s largest grocery retailers, sold the bulk of its operations in China to a domestic retailer after struggling to compete with more nimble delivery providers.